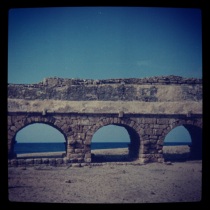 Peter relaxed on the rooftop and offered a prayer of thanks. He had let a servant know that he was hungry and looked out over the surrounding buildings along the sea as the meal was being prepared.

This Jewish town of Joppa buzzed with the news of how he’d raised the woman Tabitha from the dead. So many Jews had become disciples of Jesus in the wake of his travels – first Jerusalem, then Lydda, now Joppa. Peter felt sure that Jesus would be pleased with the feeding of his sheep.

He still felt the sting of shame from how he had denied knowing Jesus. Despite his unfaithfulness, he’d been forgiven and even empowered. He planned to make the most of this second chance.

The sky was blocked from view by a descending sheet, and Peter grew dimly aware that he was experiencing a supernatural vision. The bulging center of the sheet landed first, followed by the corners, to reveal an assortment of animals, reptiles, and birds.

A voice in his ear told him to kill and eat, but he thought it was a test. All the animals were forbidden for Jews to eat in the Mosaic Law. He said, “no way!” three times, despite the voice telling him not to question God’s ability to purify anything, before the offending menagerie was finally taken back up into heaven.

What a strange vision. What could it mean? Peter was just beginning to ponder deeply when he heard a knock at the door to the house below.

No one answered the door to the three Roman Gentiles out there. Jews didn’t mix with the enemy occupier of their land. Undeterred, the visitors called out, asking if the man known as Simon Peter was staying there.

At that moment, Peter heard the Spirit tell him, “I sent the three men who are looking for you. Go with them.”

Do you think the number three was significant to Peter?

I think Peter heard the number three in the Spirit’s voice and broke into a cold sweat. Three men. Three invitations to eat forbidden meat. Three times Jesus asked if Peter loved him. Three charges to feed Jesus’ sheep. And most memorable of all – the predicted three times he denied knowing Jesus before the rooster crowed.

Were all those threes setting him up for this key moment in which so much rode on Peter’s obedience? Would he go with the men?

The visitors told of the request of his presence in the home of a centurion, the military commander of a hundred soldiers. No stranger to a jail cell, this must have smelled like a trap to Peter. But he was determined not to deny his Lord again. He invited them in to the house to stay the night.

Ten men embarked the next day, for a two-day, forty mile journey to Caesarea.

Peter went despite his abhorrence for Romans and Gentiles. The prospect of traveling with them carried the same aversion as eating roasted lizard meat. He took six Jews with him – three times the number required to testify in a Jewish trial.

What will people think?

Imagine the reaction of Peter’s fans as they strode along in broad daylight. What on earth is Peter doing with those guys? I thought he was a holy man?! The Romans must have felt the disapproving glares and may have wondered if they were going to get out of the situation alive.

What do you suppose they talked about as they walked? Did the Jews ask about Cornelius – how he had come to fear God? Maybe Peter was in the act of explaining that Cornelius’ good works weren’t enough to be accepted into the faith before he remembered his vision about purification.

Somewhere around the middle of their journey they crossed over into Gentile territory and the hateful stares shifted toward the Jews in the party.  Cornelius met them at his house, together with a crowd of his family, friends, and neighbors.

The pregnant moment of decision

As Peter described his change of heart toward them, and explained the good news of Jesus, they were overcome by the Holy Spirit in a way that the Jews believed should have been impossible.

Who was converted? Certainly Cornelius’ faith was ratified by the Holy Spirit, but it could have happened without Peter being there, right?

I think the point of the story is the heavenly effort put into getting Peter to Caesarea to experience the event. Somewhere on the road, it was Peter who was converted to God’s kingdom plan to include all nations – not just Israel.

The power of a stroll and a conversation?

Remember, Peter wasn’t told by the Spirit to convert Cornelius. He was told to go on a journey with three men, to start a conversation.

What if the Spirit told you to you take a walk with a Muslim? Would you do it? What might happen as you talk on your journey together?

Many unsettling questions go unanswered when preparing to move to the Middle East. Will my hair dryer work with 220 power? Will I be able to use my debit card in ATM machines? How will I get Microsoft Updates with a dial-up Internet connection? But perhaps the most haunting questions are about food. How will my dietary habits have to change?

I’m thinking particularly of a vegetarian friend of mine who is heading to Turkey soon.  A great way to understand how people on the other side of the world think is to get a peek at the routine of their daily lives and how it differs from ours. Here’s the story of my first meat buying excursion after moving to Lebanon in 1999.

A Trip To The Souk in Tyre

Denis and I went to the open-air market and approached the blue-painted walls of his favorite butcher. He picked out a chicken in the same way that someone in a fancy restaurant might choose a lobster. She looked at us and blinked as she was extracted from the cage by the vendor. We had time to name her if we wanted. How about Hilda?

It all happened very quickly and with no warning to either Hilda or me. With practiced precision the knife flashed at Hilda’s throat and she was thrown head first into a hole in the counter. After three minutes, the chicken stopped thrashing around inside the cabinet.

Another worker came and submerged the bird in scalding water to loosen the feathers and then threw it into a cylindrical machine, shaped like a clothes washer. Plastic quills inside, sticking out from the walls, neatly removed the feathers as the chicken spun around like it was in a blender.

The butcher then deftly sectioned it and removed all the innards. Was it my imagination, or was its heart still beating?

The meat was placed into a small black plastic bag – its handles tied to produce a loop for easy carrying on a finger. The bag went into the scale and Denis paid by the kilo.

By the time we got back to my friend’s house and presented his wife with the fruit of our manly hunt, the bag was still warm.

That’s what I call fresh chicken!

In my youth, I cleaned the meat market at Vashon Thriftway. The chicken scraps I scraped off the counters at the end of the day represented the chicken’s last stages of processing from coop to table. But the meat arrived at the store in boxes, not cages. After all, meat is supposed to be presented how God intended – refrigerated and encased in Styrofoam.

Maybe removing the visibility of the butchering process has allowed westerners to become overly carnivorous. It could be that you’d like to know more about the source of your food. How do you think your dietary habits would change if you had to look your dinner in the eye before eating? Would you eat more or less meat?